What Are Calico Critters Made Of?

What are Calico Critters and Sylvanian Families toys made of? 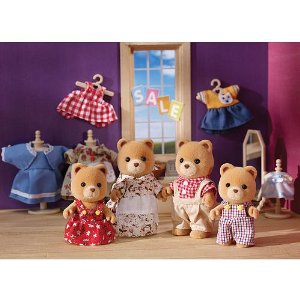 This was an intriguing question to me and just about any other parent who lets their children play with plastic toys.

Not All Plastics Are Created Equal

As I mentioned on the home page, I generally run screaming from plastic toys and only purchase them if I know they are made of non-toxic plastic and will last for the life of my child’s interest and then can be passed on to others rather than thrown away broken.

When my daughter became interested in Calico Critters I was somewhat overwhelmed by their cuteness and as my preliminary investigations into their composition came up short, I dove in based on reports they were well made.

Having had a number of Calico Critters animals and sets now I can indeed say they are well made and will withstand just about any abuse from a young child and will last enough to be passed when no longer played with in my home.

In the last week I also came across an article written a couple of years ago by a mother in a similar position who emailed the manufacturers to find out what they Calico Critters were made of. Smart woman!

She was told that “…their bodies, heads, arms, and legs are non-phthalate PVC, their fur (“flocking pile) is nylon, and their clothes are cotton. Their houses and furniture are made of HIPS, ABS, and non-phthalate PVC.”*

So although they are made of PVC they are not made of non-phthalate PVC which is not the toxic kind.

This, I suppose is some consolation.

Calico Critters are not toxic at the mouth end but still involve some yucky chemicals to produce. Which brings me back to my philosophy.

Calico Critters Are Ok By Me

If you are going to have plastic toys in your house, make sure they are not toxic to kids and, given that their production involves petroleum (a limited resource) and don’t break down easily in landfill, buy only plastic toys that are well made and will not break after easily.

So I feel fine about having Calico Critters in my house. They are well made and I know that when my daughter is all grown up, I can pass them on to other children who will love them just as much as my daughter has.

Get the latest news about Calico Critters & Sylvanian Families delivered for free: